“Situations” at the 56th Venice Biennale 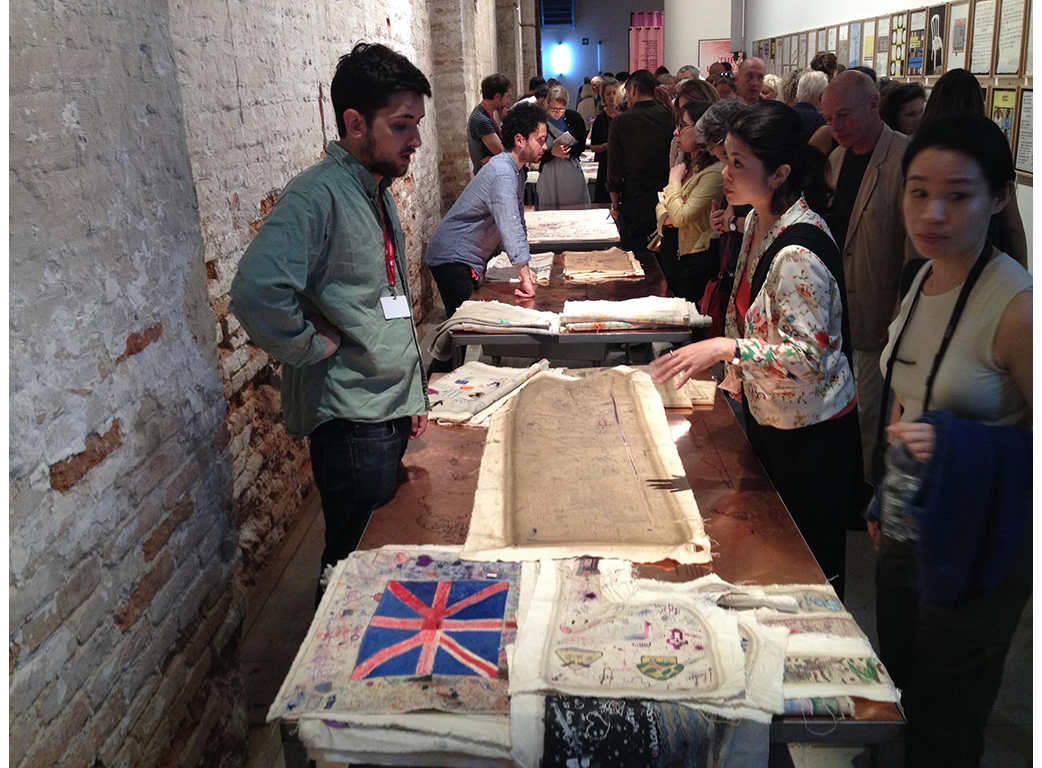 
“Situations” at the 56th Venice Biennale


Highlights from a personal tour of the 56th Venice Biennale, curated by Okwui Enwezor. “ All the World’s Futures”?

The Giardini and the Arsenale, maybe the only practices laying in the contemporary research behold and reveal at the same time, some examples of situations; situations where something happens, works that set off a dynamic between the audience and the space, or between the audience and pieces of the work itself. In other words, works that stimulate a relationship between the public watching the space and what is happening inside a given space in a passive or active way. Amongst these works, the one of Adrian Piper, the winner of the gold lion for best artist in this Biennale.

The first stop is “Rapture” of Camille Norment (Nordic Pavilion), composed by an installation, a performance and the publication of three books about the history of sound perception. Rapture is a work about vibrations and energy, where energetic vibrations create a rapture breaking the material.

At the Canadian Pavilion we are introduced to a typical Canadian shop. Here lies a theme around the transformation of the space in a place with already defined dynamics; a sort of a proposal of a situation for the audience.

At the Corderie in the Arsenale, we witness a scene reminiscent of the Bazaar dynamics with a prevalent exchange of information and questions.

The space is then transformed in an office with some concrete rules set, facilitating the participation of the audience as art happens.

re-enacting of the Venetian Mosque. The spectators have to be in line with the rules of the Mosque, in order to be part of the work.

At times the transformation of the space becomes more sensorial in the way that the audience is invited to “participate”; to literally “be part” of a given art work. For example, the relationship between the visitor and the blue sand (Kosovo Pavillion), or the vapor (Tuvalu Pavilion)

In the Slovenian pavilion,  the artists-performers paint and write on every available surface, acting to convert the space; they sing and play the piano; they change the resulting “choreographed” work at every moment. Here the audience takes upon the role of mere assistance, with no direct participation.

In the Maria Eichhorn’s piece, staged at the Artiglierie, the visitors become the artists. They are in fact called to make monochromatic artworks that will stay on view throughout the Biennale. It is quite interesting  - and funny - to see how many visitors have signed up multiple times, maintaining the same yearning: to make multiple, signed works… with the ultimate chance to be seen and recognized.

Alessio Mazzaro (1985) is an Italian artist. Graduated from Padova University in Environmental engineering, he studied Fine art at IUAV, and performance in important institutions, as Biennale College Teatro and ROSAS. He was an assistant of Flaka Haliti at 56th Biennale d’arte di Venezia and of Petrit Halilaj at the 55th. He works as a performer for BarokTheGreat and he is the founder of S'odinonsuonare.