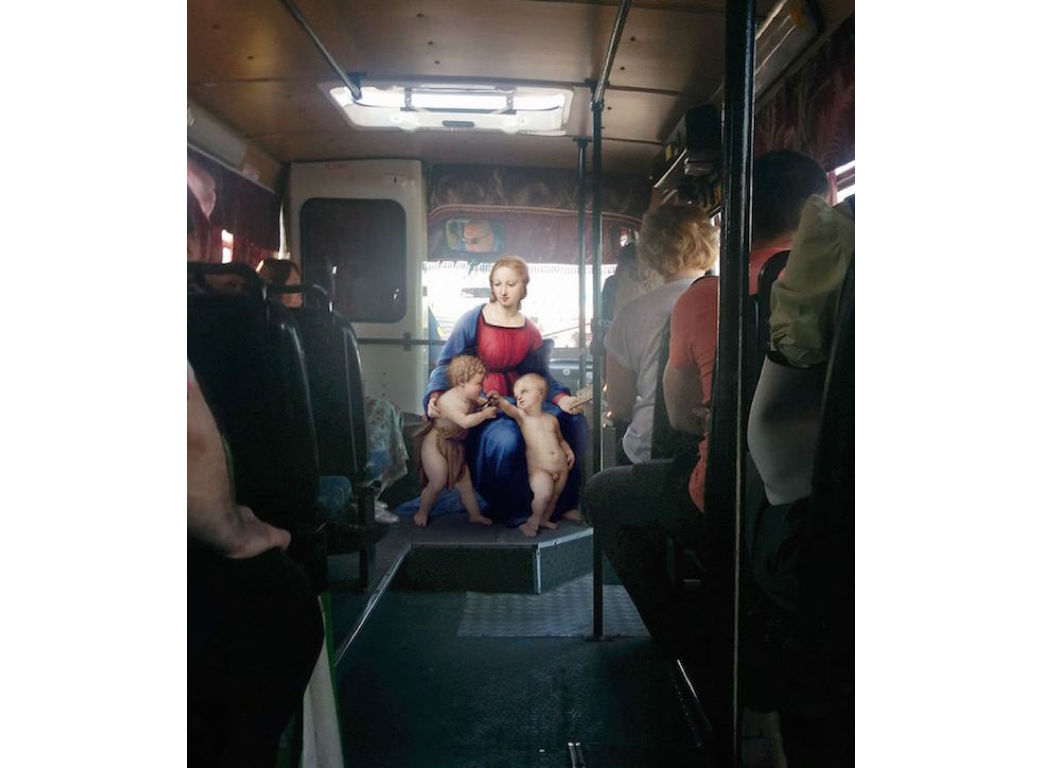 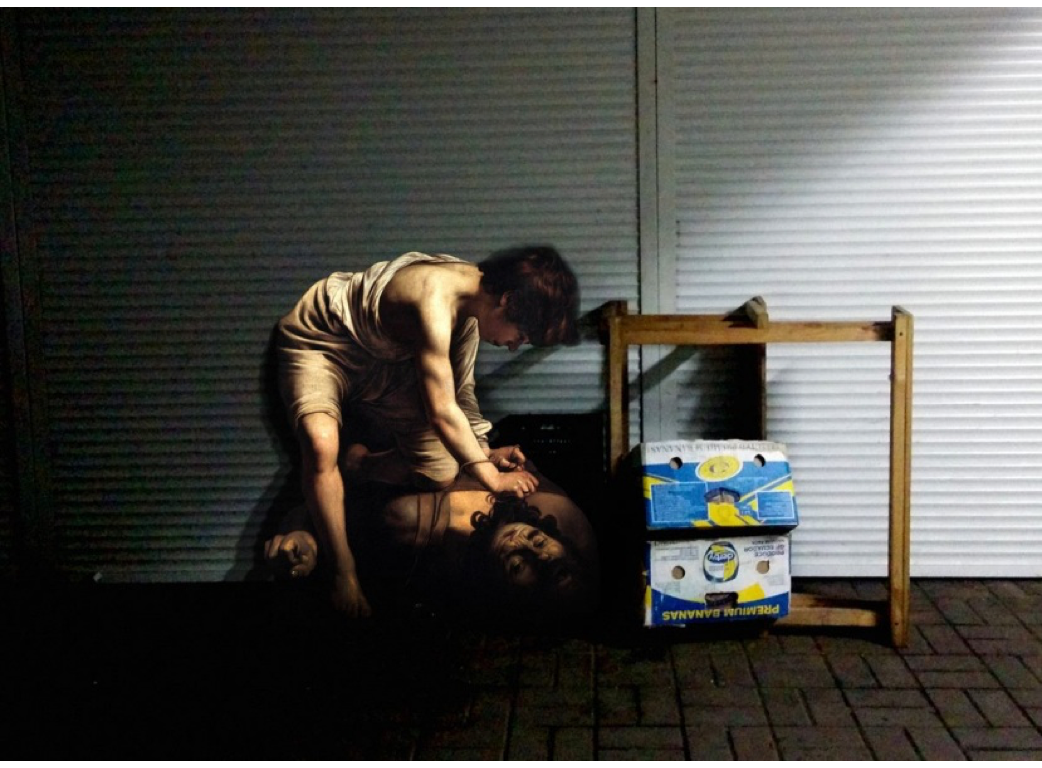 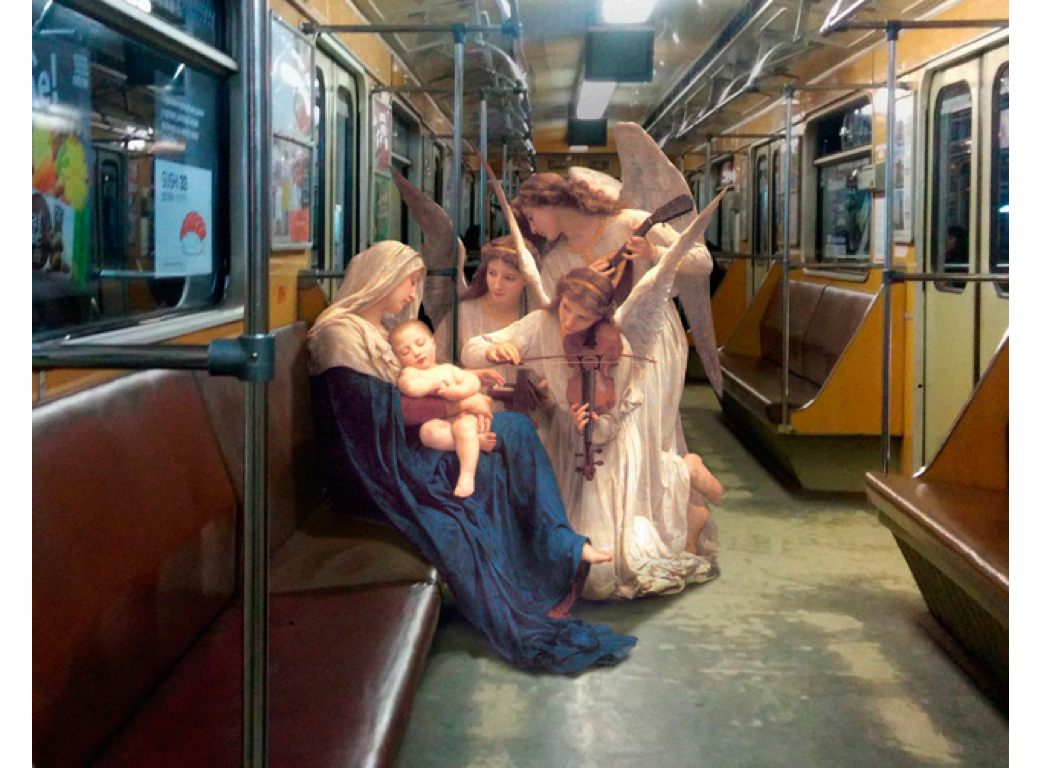 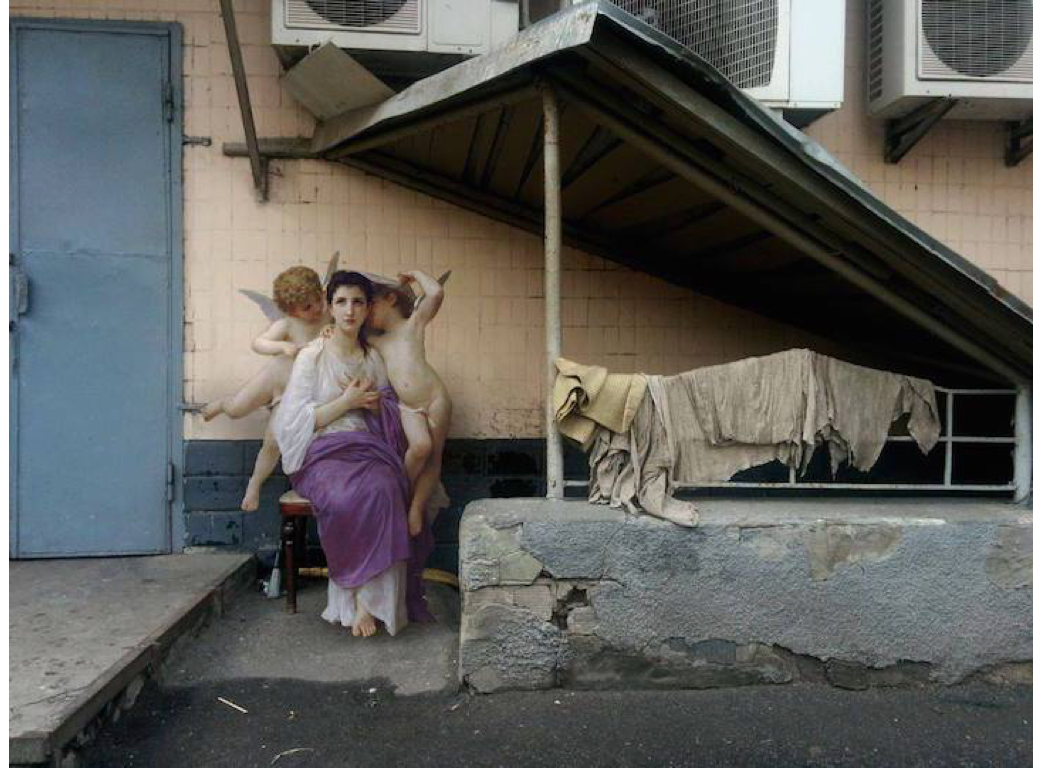 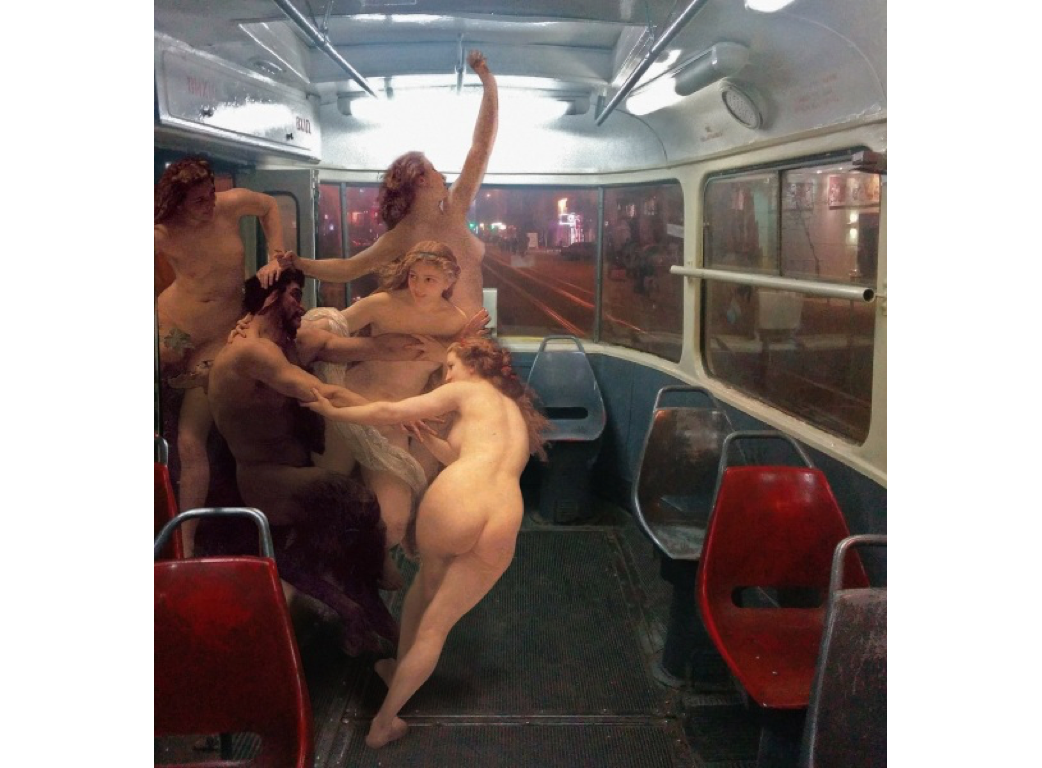 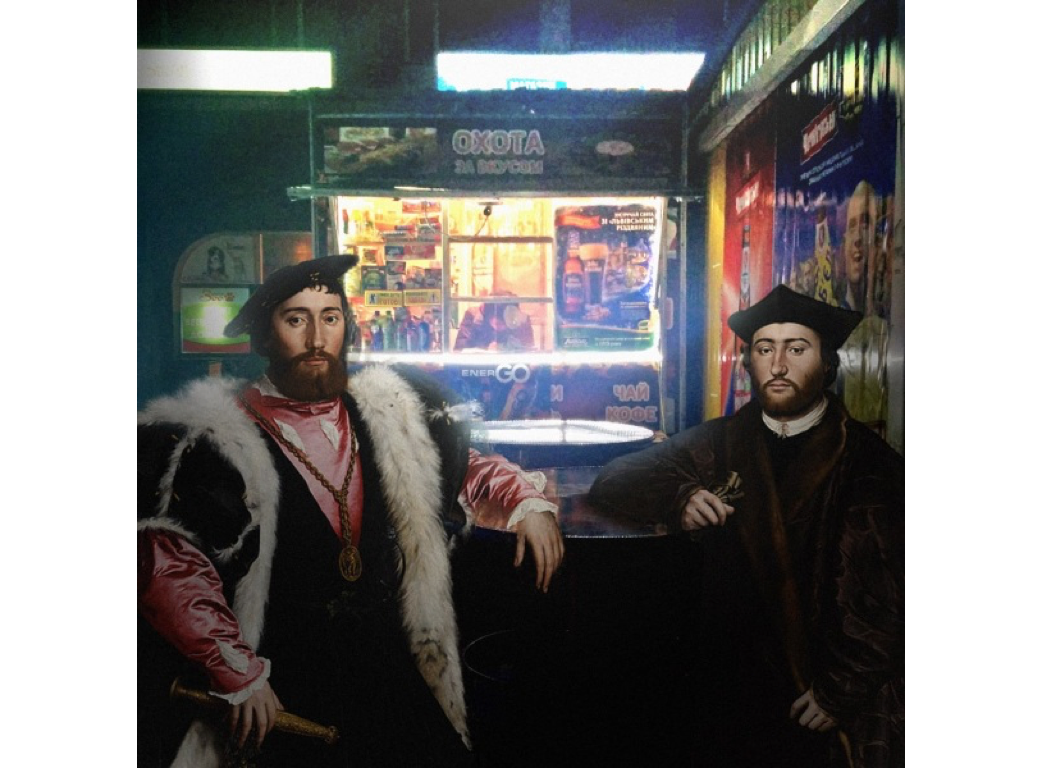 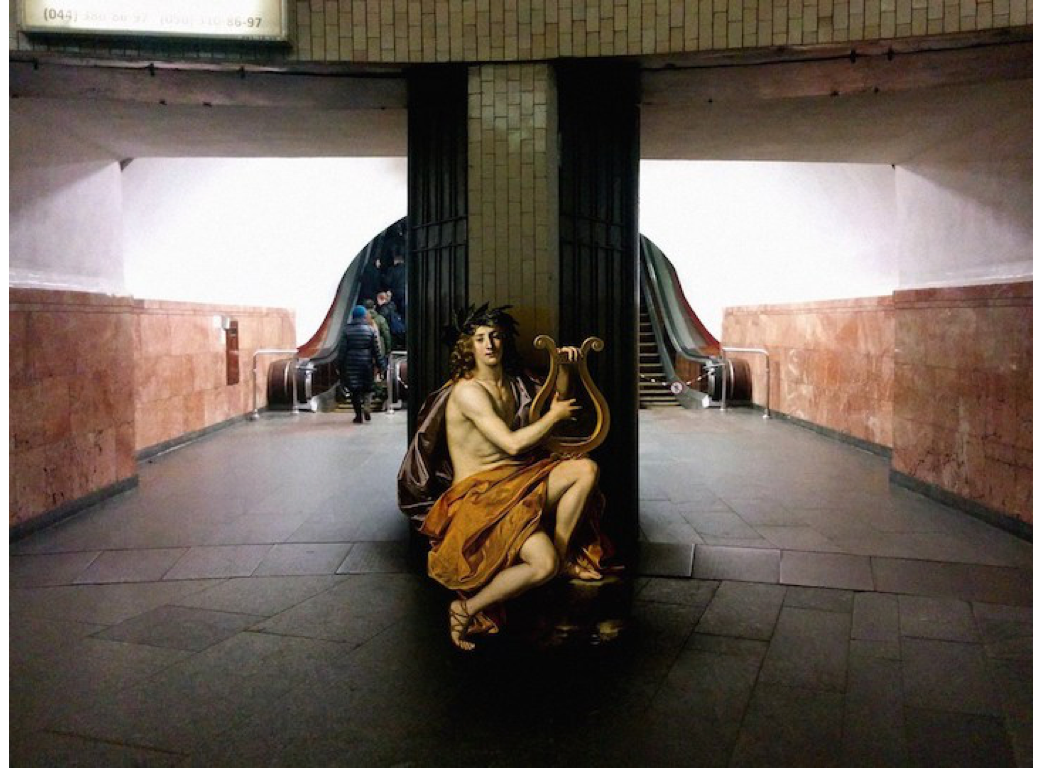 
Have you ever tried to imagine the most famous characters from Classical or Neoclassical paintings living in contemporary landscapes?

If you haven’t yet, Aleksey Kondakov can show you the way:

Aleksey Kondakov has brought to life not just people but starring characters celebrated in the history of art as virtuous examples of beauty.

The manifesto of Italian Romantic art, The Kiss, painted by Hayez, changes the mediaeval background, with the young lovers relocated in a metal train carriage. The holy appearance of the Madonna of the Goldfinch by Raffaello Sanzio, is depicted in a passenger shuttle behind the driver.

Hans Holbein the Younger’s The Ambassadors are spending their night out sitting in a sleazy street bar.

It is obvious that William Adolphe Bouguereau’s paintings are a great source of inspiration for Aleksey Kondakov: In Song of the Angels, the Virgin Mary and child enjoy their daily ride on an empty subway where the angels become buskers, while in Nymphes et Satires we witness a moment of seduction on a tram.

The masterly use of Photoshop, along with an exceptional collage technique, are the artist’s secret creative ingredients.

Kondakov’s works are characterised by drama and passion, the light of the artworks is romantic and the characters are lost in reality. His meticulous technique makes every backdrop rough, authentic and in the flesh, giving all subjects a sort of a pop-art feel.

This year, the artist had his first exhibition in Italy, in the heart of Naples, with the presentation of the Residenza D’Artista project, hosted by the Show Desk organisation, that focuses on a dialogue between contemporary artists and the multifaceted Neapolitan reality, aiming to interpret and elevate the region and its cultural heritage.

In his effort to create a personal narrative portrait of the city breaking the pre-formed schemes in search of new interpretations, Kondakov created 16 artworks inspired by Naples. All the artworks were destined to interpret the fairy tale of this otherworldly city.

These images took a virtual worldwide tour revealing the artist’s work that is unique on so many levels. The explosive virality was to be expected, and besides, we have to admit that it’s simply amazing to be casually confronted with Raphael’s Virgin sitting next to you on the subway early in the morning.